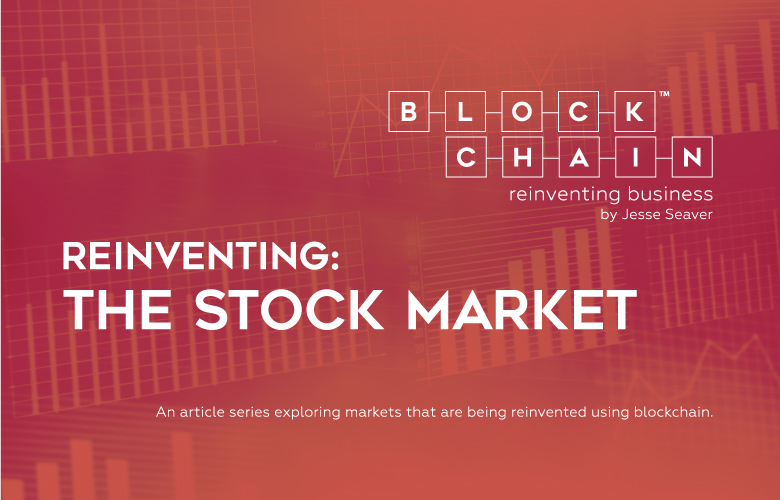 The real estate crisis of 2008 and the subsequent market crash was perhaps the singular event in many of our lives that solidified the idea that the massive banks do not have their citizen customers best interest at the center of their priorities.

Almost a decade later, we see some penalties applied in the form of, mostly, a fine. These most recent penalties are one in a series of similar costs that the big banks have incorporated into their balance sheets to do business. They are, as we have all heard, too big to fail, and therefore, very liberal with the risks they are willing to take inside and outside of the law. I won’t continue here, as I’m not a lawyer, and I don’t want the overall point of this article to be about the issues with big banks. However, it’s important I start out with this because it is perhaps the core emotional and practical reason so many are attracted to the blockchain, and it’s associated tokens.

It’s shares of ownership are trustless (meaning you can trust them without a third party needing to verify that you can), decentralized, not owned by any big bank, and for the time being, not regulated by any single government. A real global people’s currency, with the only current real potential big influencers being the largest token holders. You may ask, isn’t that the same as today; those with the most money control the currency? Yes, they do - the thing is, the system is not build to benefit everyone equally at the same time, the way it can be with blockchain.

For example, now, if you want to participate in the global stock exchange, and invest your retirement savings or speculate the success of a hot stock like TSLA, for example, you need to be willing to pay the market maker fees that come along with your trading your cash for shares. When you buy them, and when you sell them. There’s no avoiding these fees, and they do not come back to you as a market participant. With blockchain, and all participants holding tokens of ownership as part of their participation requirement, profits could be spread across the board for everyone.

To be fair, there should be fees, because systems cost money to run, and the people dedicating their lives to running the system need to make a living. If you are a banker reading this article, please know, I’m not trying to criticize you or your career. However, I think many would agree it could be a bit fairer and balanced for the smaller investor to also benefit from the overall market existence than it is today. Would you agree? Comment below telling me why or why not, please!

How can blockchain change the ownership of a stock (or token) exchange?
The beauty of sharing profits using the blockchain is that all the same elements of benefit that exist within today’s traditional markets. Such as spreads, commissions, margin interest, transaction and placement fees, lending, borrowing interest (and many others), can all be distributed to benefit everyone involved, instead of a select few at the top that are within the managerial, organizational tree of the system. Because blockchain tokens allow for a truly distributed allocation of ownership, a unique opportunity lies in the idea of a new ‘token exchange,’ with a liquidity pool, owned by its token holders. It’s a co-operative financial exchange, instead of profits isolated to a few groups, they would be directed to a pool that is divided and shared by all token holders.

I do not intend to give investment advice in any of my articles, as I am not an investment expert, but, this seems to be a chance to be one of the initial investors in the stock market of tomorrow. If it takes off, you could compare this to the opportunity that presented itself to the 24 brokers and merchants who formed the New York Stock Exchange in 1792, when they signed the Buttonwood Agreement outside 68 Wall Street.

The idea of a cooperative, participant owned exchange is fascinating, and the blockchain is reinventing the concept of a stock exchange to make this approach possible. Let’s take a look at one startup trying to do just this.

This revolutionary new blockchain company is aiming to democratize the financial markets and save money for investors and businesses through reducing and eliminating fees and inefficiencies. By utilizing its innovative Blockchain trading platform, 50% of all net profits are distributed back to the pool of token holders.

This results in significant gains for all involved in the market, whether they are the one executing a trade or not! Check out section 4.3 of their whitepaper for an explanation of how the liquidity pool could make stakeholders money.

What types of stocks will I be able to buy and sell on the trade.io exchange? I asked the same and their CEO Jim Preissler.

“We aim to list all types of companies [including] either existing or startups, on an existing exchange or not on an existing exchange. We do expect listed companies to list an ADR or similar instrument on our exchange. Reason being is that the barriers to entry, while still strict are more company friendly, on the trade.io exchange. Not to mention we can work much quicker to list a company as we operate much leaner and more efficiently than a traditional exchange. Additionally, being listed in the trade.io exchange provides the company with the potential to reach a far more diverse and different audience than perhaps they are familiar with.”
The trade.io exchange could fundamentally disrupt a whole ecosystem of banks, advisors, markets, by offering a more efficient listing of assets in the crypto economy under the indelible and trusted history that Blockchain if proving to provide.

While there are significant regulation hurdles, as every facet of their business requires licensing and regulatory oversight, their management and legal teams have extensive experience setting them up well for success in this area. In fact, Chinese-American Billionaire and majority shareholder of French football club, OGC Nice has been appointed to the Board of Directors. Mr. Lee comes with over 30 years of global entrepreneurial and venture capital experience.The company couples these operational assets with investment banking experience, senior advisory expertise, as well as operating their system in a regulated and compliant environment. They have raised over $9M so far through their ICO, and is now offering up to 275 million TradeTokens, which are available to purchase via pre-ICO from 7 November 2017 to 21 November 2017, with the ICO occurring 22 November 2017 to 29 November 2017. Learn more in their FAQ section.

Another fantastic example of blockchain reinventing and distrusting markets, in this case, literally!