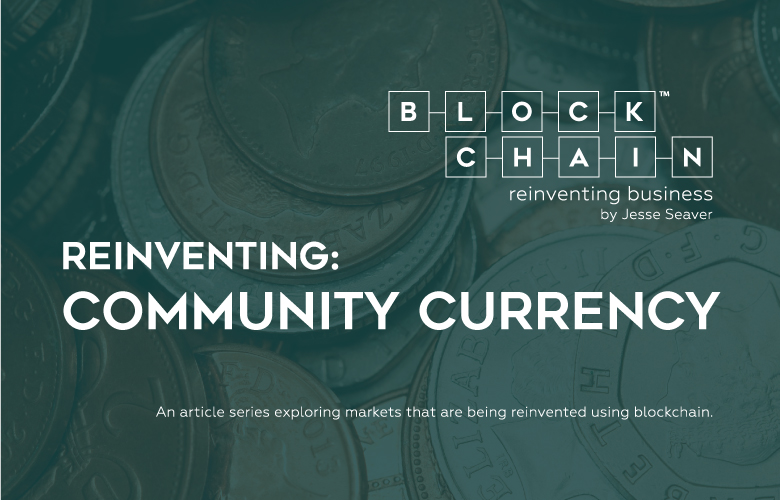 This article originally appeared in HuffPost on 11/02/2017

Perhaps one of the most potent potential impacts the blockchain will have in the world is its power to empower the individual radically, and his or her community to shift power from big centralized corporations and banks directly back to the people who live in the communities they are living and shopping in.

When a community controls their local currency, they also manage oversight of their money. They also control oversight of the local economy, resulting in the possibility of new community-issued funding for local business. The opportunity this offers is immense, because what’s best for a community, economically, can be directly determined by those who live and work there vs. a centralized team of analysts granting loans from afar.

You own a small bakery, and need a business loan to replace your cold cases and polish your storefront a bit. You estimate that you need $25,000 for removal of the old cases, installation of the new cases, as well as some miscellaneous signage and a couple of new tables. Traditionally, you would walk down to your local banker and see if they can help you. Or, you may just hop online and apply for loans so that several banks can compete to offer you the best rate. But, imagine another scenario, where you propose the upgrades to your business to your current base of customers, and neighboring business owners. You give the people who have supported you to date and will support you in the future the option of benefiting directly from giving you a loan instead. Instead of paying interest to a bank on the other side of the country, you pay your community interest. This means this money comes right back to your pocket, as naturally, they spend some of this interest earned with you at your bakery.

Ok, simple enough in concept, but how can the blockchain achieve this? After all, there have been many examples of local currency in the past, why is this any different you may ask.

The reason blockchain can achieve this in a way not before possible is because it inherently allows everyone who participates in the system to be a stakeholder, and essentially a shareholder, in the currency. A token, whether BTC, ETH, or a local token created for your neighborhood, is a share in an overall pot of value based on the token price. Not only that, it rewards those who get in early, providing a real incentive to start or promote a token. So, when it comes time to get a loan, anyone in your local community can become part of the pool funding that loan, and become part of the group benefiting from it.

Ok, let’s play out the bakery example with a community currency token.

Assume you can buy and sell this token for your local fiat currency, such as Dollars or Euros, and then you can trade it freely within the currency ecosystem using an app on your phone, just the way Apple Pay, Venmo, or PayPal work when you send and receive money. You can also imagine a version with physical cards, but since the world isn’t heading that way, I won’t either. Let’s call this token that you can buy, and then trade locally, CMTY.

Customers begin spending fiat money at your bakery & neighboring businesses also start accepting CMTY, and after some time, there is over $10,000 worth of value in the tokens, split up between everyone who has bought and accepted them for payment. People are now able to buy and sell all sorts of things with CMTY. Through the app, they are able to split checks, cab rides, and tips for their dinner in CMTY. Anywhere that accepts it, can trade in it, essentially creating a brand new currency, with your communities focus in mind.

Now, instead of asking one banker for a loan, you can ask your entire community to support you.

Everyone who walks in the door can loan you some CMTY. In a crowdfunding manner, you can raise your loan amount, and pay back your loan amount to everyone who chose to participate. Because the CMTY is backed with fiat currency and has instant liquidity, it can be sold by you to buy things that aren’t yet available to you in CMTY (like perhaps your cold cases).

For this to work, there does have to be a standardized platform on which this system runs, and that allows for the trading of fiat currencies to tokens. Everyone who owns CMTY must agree to use a common set of tools, and just like any other token, be able to buy and sell it freely. In addition, for a common commerce token, it must be easily spent and accepted, so a set of tools to do this is essential.

Colu, the leading digital wallet that uses blockchain technology to localize currencies, has developed an open source platform that will allow anyone, anywhere, to create a localized currency token that can be used to achieve the above-described example. Their platform powers the technology to buy and accept tokens (like when buying coffee from a bakery) and the platform to exchange and trade token for fiat currency (like when needing to sell some CMTY for cold cases). Because their platform is open source, this means that there are limitless versions of this scenario that can be built, tested, and implemented.

Colu has already secured a substantial amount from top notch investors including Spark Ventures, Aleph Ventures, Tom Glocer, Prof. Dan Ariely, and others. Another important figure to note who is acting as an advisor to the company is famed Uber investor Bradley Tusk. Colu has announced plans for an ICO where they hope to raise $50M. They have commitments for a little more than 12M in their initial funding rounds with inventors mentioned above.

In my example above, I created a token called CMTY. This token would run under the Colu network and trade up for a CLN token. Think of this as a master token that can represent all tokens, allowing for one community to trade tokens for another community, and so on. In a world where blockchain powered tokens were everywhere, you could exchange your ‘London Token’ for a ‘Sydney Token’ when traveling, and never go back to fiat. In this way, The CLN token will be the backbone and the global infrastructure for the already running community tokens, such as CMTY in my example. By creating these specialized community tokens, Colu gives users the increased ability to shop local, eat local, buy local, and live local, strengthening the local economy, and keeping control of money in everyone’s hands.

This offers an unprecedented opportunity for driving global change from the digital wallet up, keeping more money circulating in the community.

Another example of how blockchain is reinventing business and changing the world.