This article orriginally appeared in HuffPost on 9/8/2017.

As someone who is openly fascinated and somewhat obsessed with Chess, it was a beautiful day to wake up early and speak with Kate Murphy, CEO of Play Magnus, founded by the highest rated player of all time, Magnus Carlsen. It was morning coffee time for me in The Bay Area, and just about time to grab a pint for them, and I greatly appreciate their time to chat and explain to me the details behind their new App Store release, The Magnus Trainer. We were also joined by and their head of PR and communications, and overall nice guy, Arne Horvei.

This app instantly feels like the next generation of unique approaches to making chess accessible and fun for all. And, that’s the thing, Play Magnus isn’t just another chess engine that would be awesome to beat (it would, and so far I haven’t). It’s fostering and beginning a new approach to the fundamental way our brains can start to and continue to learn chess.

Train With Magnus is designed in the way in which Magnus himself remembers teaching himself how to play, super powered by his ‘Chess Brain Trust.’ Including mastermind Olga Dolzhykova, a well known Norwegian chess event fixture, Ph.D. and Grandmaster, Torbjørn Ringdal Hansenas, Magnus’ first chess coach, their team of designers, and developers. And, now, hopefully, a new user, you.

Clearly, with a platform like Carlsen’s, it’s no surprise to see an attempt at creating a brand. But, this seems to have been done fully, and well. It all started when Kate met Magnus’s Chess coach and ‘Sensei,’ Espen Agdestien, during her second year in Norway. They decided to dive into building a business around Magnus Carlsen and his unique approach to learning chess. She is not a chess player, loves connecting people to learning. It was a perfect match, as they didn’t need any more chess masters around, but business and entrepreneurial expertise were excellent. Kate previously founded the startup iDance in Canada and was ready to take on her next venture, this time in Europe.

Business plans were drafted, funding was raised, and their initial product, Play Magnus, was taken to market and launched in 2014. The project has continued to morph to include the physical and digital physical universes of chess, becoming part of the Billion dollar board game market.

My first question in our chat wanted to know what was behind the games; how were they formulated to match Magnus’s training desires as he grew up to be the third youngest Grandmaster of all time. The core thread behind the games were all developed in house, with oversight from Magnus on what worked for him when he was first learning. Out of this, the app has two major sections, which are woven together into a comprehensive, always updating, course.

On one side, is a complete set of lessons, covering Foundations, Tactics, Strategy, Calculation, Openings, Endgames, Highlights, Mates, and more. The app is styled to feel as if you are chatting back and forth with Magnus himself, with a nice easy to read color palette, relaxing design, and fun little-integrated videos that I call ‘Magnus Reacts.’

Then, on the other side, a set of unique and original chess training games. With titles like Mind Mirage, where you have to memorize where chess pieces are on the board, or Beach Bounty, where you pick the best path for piece movement around the board by connecting sea shells. It’s a visual mind training around elements of chess, and then integrating that essential understanding of being able to ‘see chess,’ with a tailored set of educational lessons to reinforce what is learned in the visual games, and vice versa.

These two together try to emulate the experience Magnus had growing up where he would create and play lots of games with his father working on differentials with chess. Magnus would then read and play himself passionately. Using that as a base, the app creates these core concepts and necessities of chess in a way that’s sticky (engaging), fun, and challenging.

The mission of the app is to make chess more fun, while also truly improving a player’s skillset. It’s about changing the perception of what chess is and how accessible it is.

“Chess is an equalizer. It has a very low threshold to get into the sport, and it’s a connector,” says Kate. “It’s so fun when you realize what chess can become, and see it be a universal connector. I was speaking to a friend who has a nine-year-old son who plays online and was playing a 50-year-old man in Georgia” the one between the Caspian Black Seas. “They were Speaking the language of chess.”

Let’s take a peek at the app. The trainer is a course made up of sessions grouped by level.

And, games focus on elements of the session. 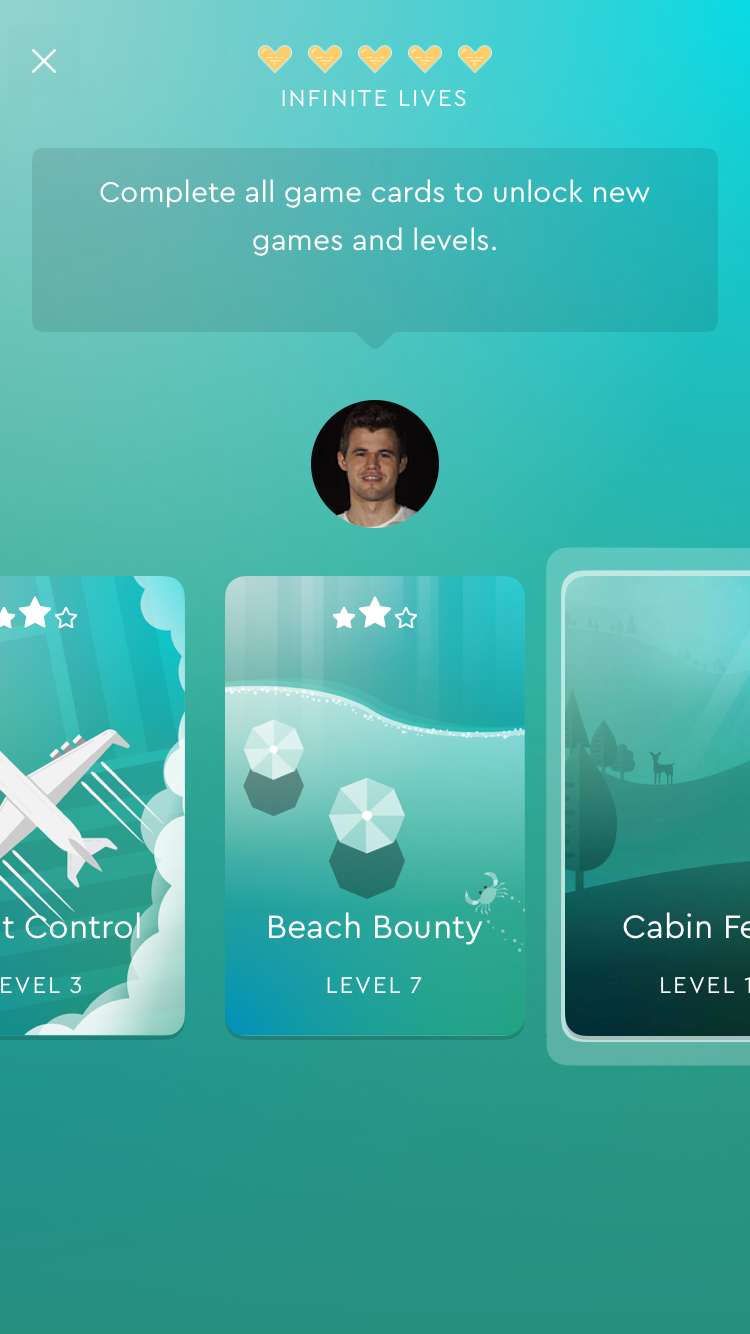 The theme of each session is related to Magnus, and his development, as well real life events from his history of chess. Such as the Beach Hunt and his time at Tata Steel tournaments, which takes place in the coastal village of Wijk aan Zee, in North Holland.

Kate continues that “The reason for the focus on these games is that, while tactics are important, Magnus is as good as he is because he has trained his memory, using visualization, and problem-solving skills. This app helps the chess student do the same.” The key element here is the element of fun. Everything Magnus has done, and all his training, has been in the context that it is supposed to be fun, not a strict regime for repetition and cramming.

It’s an ongoing, never ending stream of chess content! Lessons are categorized into to Easy, Medium and Hard, and all three are being continually built and added to, so this app doesn’t die on the vine after you finish all the initial content. Kate promised me that new games would be continually slotted into the new sessions. :)

One of my favorite things is that, as you go, they provide detailed analytics of your progress, in each of the core competencies, such as Fundamentals. This is done with a goal to truly understand the player’s weaknesses and strengths. 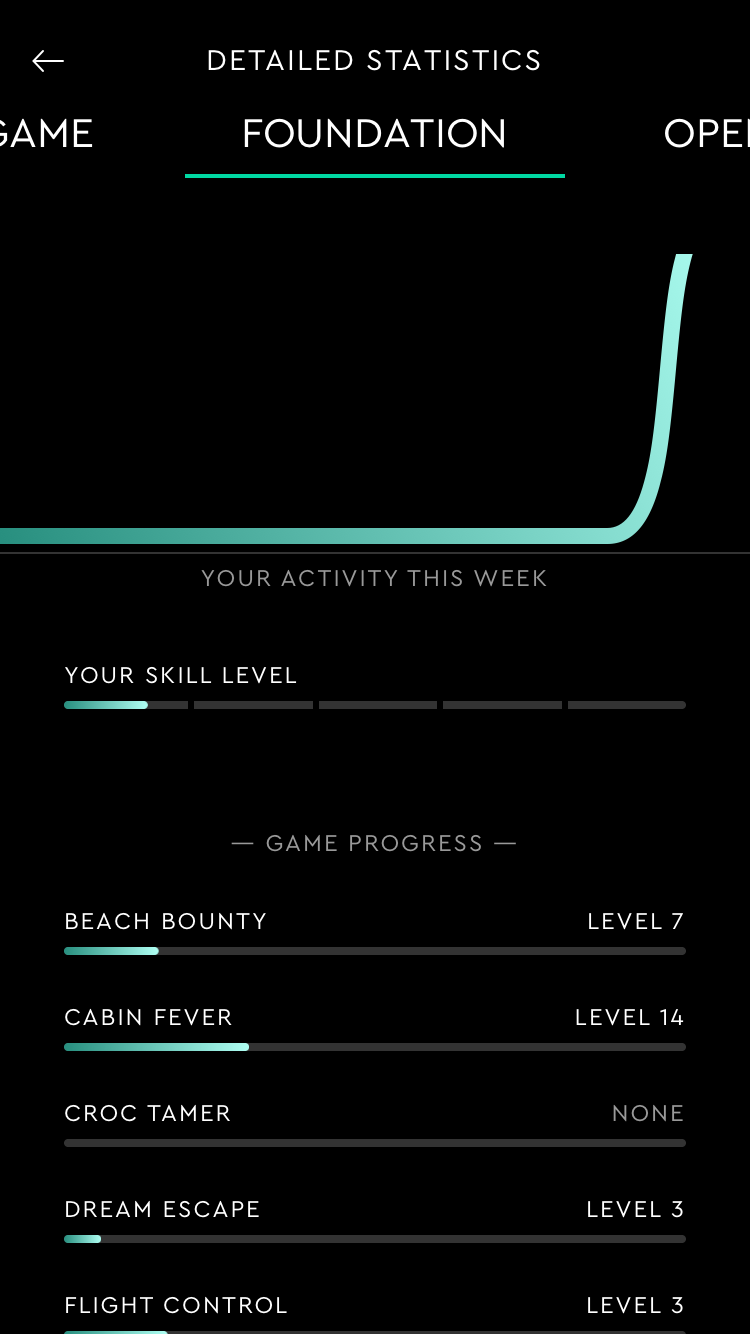 When you buy this app you’re buying into a membership that gives you continual content. Every Theory Thursday they call it, a new lesson will come out for all users. For example, this week is a lesson on Undermining the Knight. Oh, what a sweet thing that is to be able to do to your opponent.

Again, what makes this different from every other instructional chess game, app, or book, out there is that it’s focused on fun. The fun is the essential, Kate explained. “To turn youth onto chess, we needed to speak their language. Many of them are playing video games but not playing games that are challenging their minds. We are focusing on bringing fun into the sport and modernizing it as well.” Magnus loves to say “When chess doesn’t become fun is the day I quit.”

So, keep an eye out as Magnus, Kate, Arne, Olga, Espen, and the entire team in Oslo, as they continue to take chess to the world in a whole new way. By the way, If you do want just to try to ‘Play Magnus,’ using a specially trained chess engine based on his play, their complimentary app does just that. It’s well worth the download and review as well.

Have a Good Game!

PS: If you are up for a challenge, or wanting to give me a beating, find me for a game on chess.com here!